SceneBox announces it is opening up its platform for all to experience.
News & Press 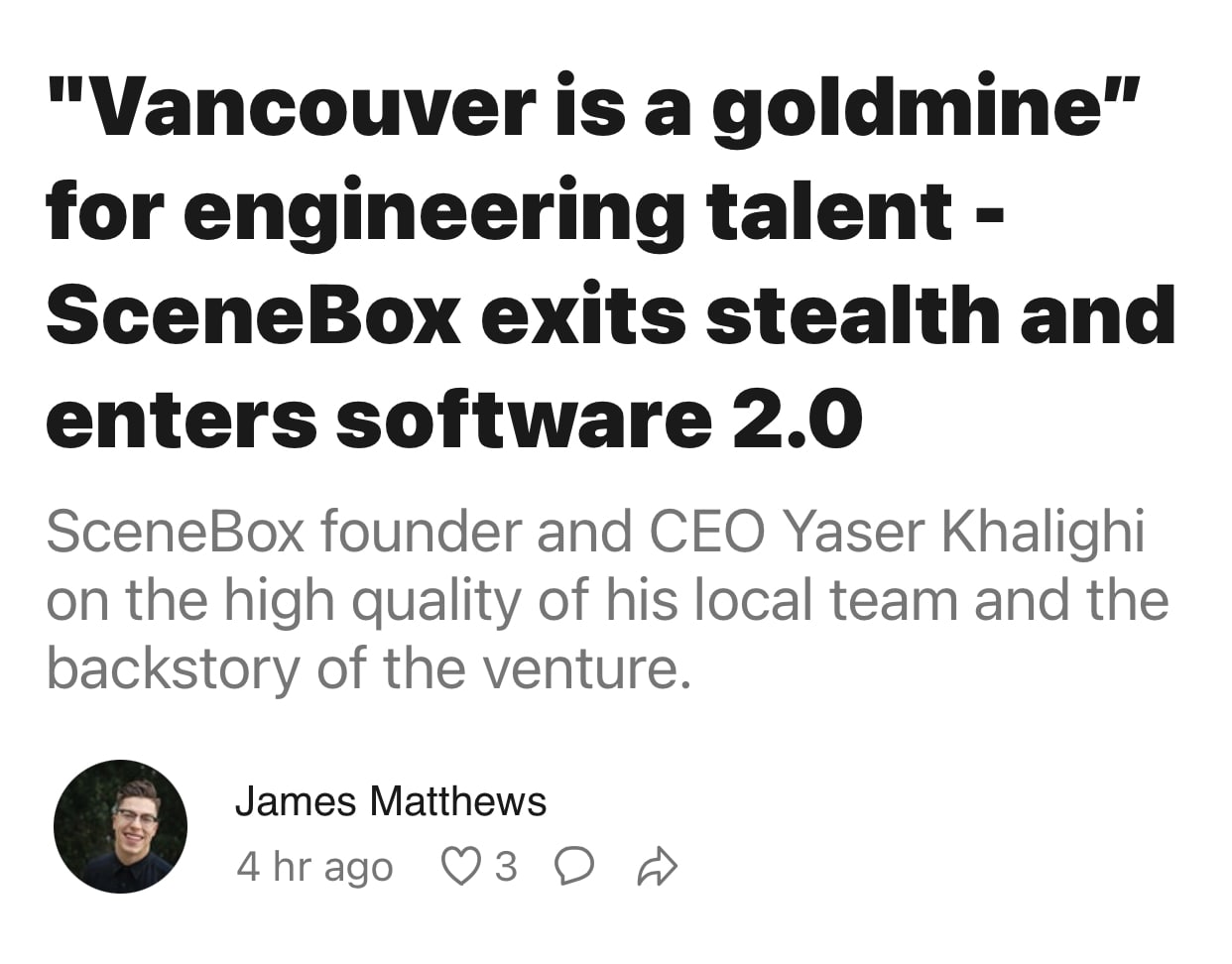 Original article by James Matthews of the Van Tech Journal
‍
For good reason, Web3 is the talk of the town. Even its mention receives cheeky, faux agenda items at holiday parties. But, Yaser Khalighi wants to talk about software 2.0.

His Vancouver-based machine learning startup, SceneBox has been ticking away behind the scenes since the start of 2020. As 2021 winds to a close, they have exited stealth mode and will openly share their “for engineers, by engineers” platform, data management software that boasts an encyclopedic collection of resources to train algorithms.

“There is no single computer vision engineer that has not felt the acute pain of data wrangling for training and improvement of vision models,” Khalighi said in a statement. “We built SceneBox to eliminate this pain.”

Prior to building SceneBox, Khalighi worked for a company specializing in self-driving cars. In crafting the tech that would allow the vehicle to recognize which lane to be in or how far away an incoming car is, Khalighi and his colleagues learned about where software was headed. The team was training their software to detect impediments rather than writing code to tell the vehicle to avoid them which, to Khalighi, is the hallmark of software 2.0: “now the algorithms are not written, they are trained,” he told me over Zoom.

He then, however, conceded that training can actually be a “painful exercise.” The sheer amount of data available creates a needle in a digital haystack situation that Khalighi estimates can take up about 90% of an engineer’s day. His own experience of spending days trying to find the perfect visual representation of a partially invisible pedestrian at the self-driving car company led to a distinctly entrepreneurial realization.

“I realized that there should be a better way of doing this,” he recalled.

SceneBox hopes to be that better way and, thus, give engineers more time to spend actually training the tech—not scouring databases. He and his team took this ethos of software 2.0 and applied it to other industries—law enforcement, smart home technologies, medical imagery—to scale SceneBox.

Khalighi grew up in Iran before making the intercontinental trip from the Middle East to California to study. Stanford called. A full-ride scholarship in computational mechanics was on the other end of the line. Post-graduation, Ph.D. in tow, Khalighi stayed in California. He worked in a pair of tech hubs—the San Fransisco Bay Area and Silicon Valley. He fell in love both personally and vocationally, meeting his future wife during this time. His wife’s family are Vancouverites so they moved here in 2017, bringing Khalighi’s entrepreneurial passions amongst their luggage.

Khalighi touts the city’s livability, loving the city for the abundance of family time and beautiful spaces to spend it in. As it pertains to SceneBox, Khalighi also has particularly high praise for Vancouver. He notes that the team features an 80/20 split between Vancouver and the Bay Area. But, of that Vancouver majority, Khalighi estimates that 50% of them are UBC grads. He refers to the local talent pool of engineers as a “goldmine” that can hang with the best of the best.

“Our clients are some of the best companies in the world that build AI. So, their problems are world-class problems. Then, my advisors and my senior talent are Stanford graduates, Princeton graduates, Berkeley graduates, investment advisors—best in class, working on this type of technology for years. What I'm really impressed with, for the local talent, is that they are working shoulder to shoulder with all of their senior [teammates],” Khalighi gushed.

In keeping with the California x Vancouver theme, financial backing for SceneBox has come from Vancouver-based angel investors and Palo Alto-based Ubiquity Ventures. Sunil Nagaraj, managing partner at Ubiquity Ventures, concurred with Khalighi’s notions on software 2.0. “It is now crystal clear that the next generation of software is trained, not written, so SceneBox is well-positioned as the hub to manage all this machine learning training data. It’s rare to find a company at the intersection of several very timely trends, so it was an easy decision to invest in CEO Yaser Khalighi’s vision at SceneBox,” he said in a statement.

Be the first to read about computer vision and ML model breakthroughs.

Subscribe to our infrequent, unobtrusive newsletter to be one of the first to hear about our latest insights. 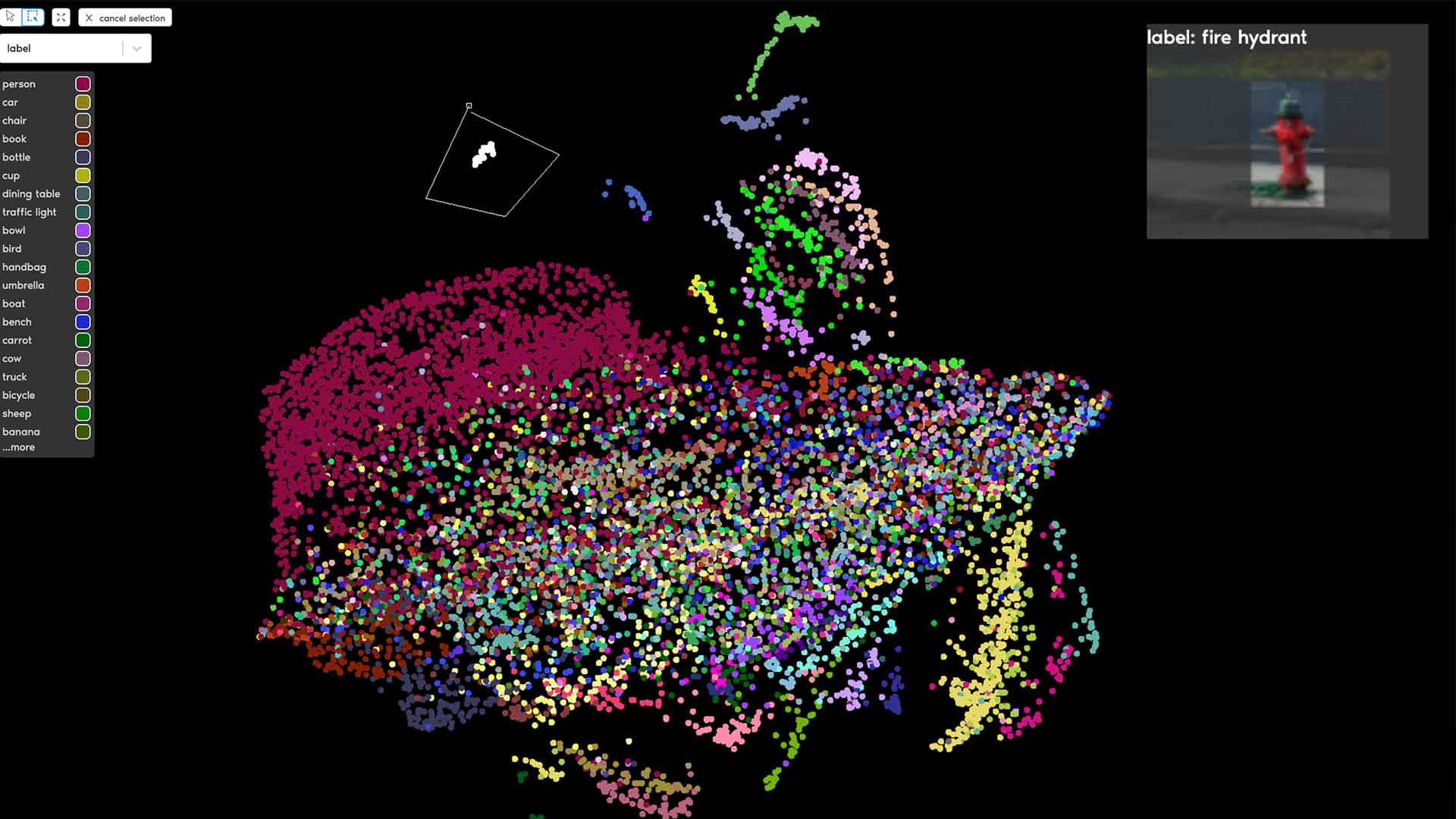 SceneBox is now open to all! 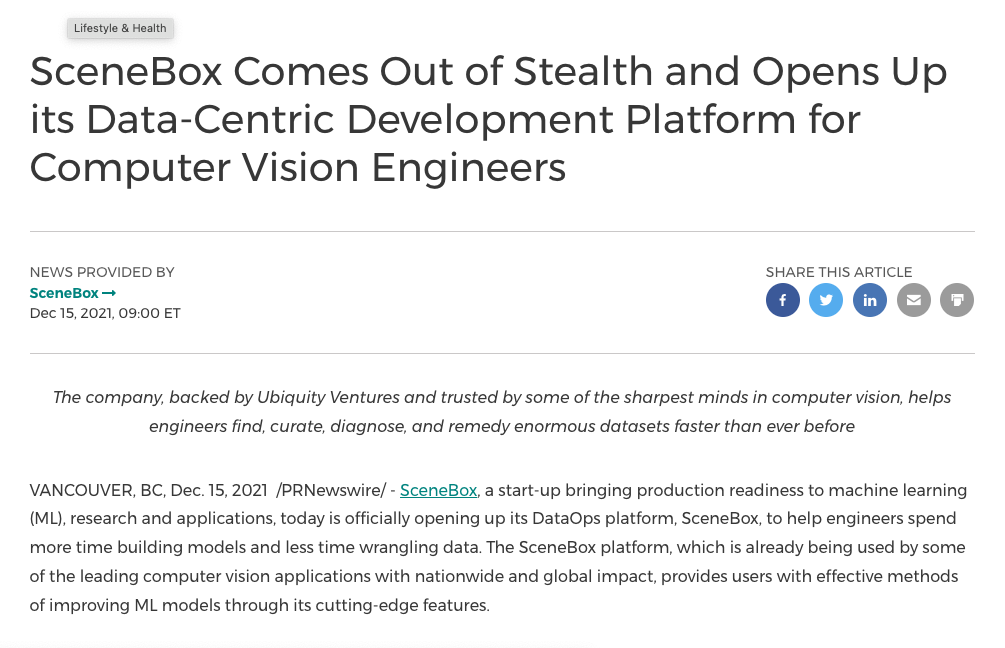 Bring data to your fingertips with SceneBox today.